Do you have a problem with the mod? Ask here for help. But read the pinned topics, so that your request can be dealt quick with.
Locked
9 posts • Page 1 of 1

As the title says, my maps are buggy. Almost everything except for the landscape is there. The only signs that there was anything there is a shadow. Even my units are invisible. Everything is there, it's just invisible. And it looks like the models are bugging out and moving right in front of the screen. If I had to take a guess, I installed the mod wrong. I'm attaching some screenshots of what it looks like.

Units can still move across bridges, but there is no bridge or units visible.

One of the models bugging in front of the screen. It's constantly and rapidly moving them in and out of view and they cross over each other, sometimes making a lattice pattern.

Could you post a screen capture of your graphic settings?

They're mostly set to low, I guess I forgot to change my settings.

i've had this before... i can't remember how I fixed it. Is it for every map or only a few?
Top

Hmmm, odd. When I read your post and booted up the game to test the maps, I have essentially still the same problem (glitched models) but some of the details are different. For instance, I no longer get things flashing in the screen but instead the trees have a glitched model and there's an orchard on the same map (I think it's Hugel 112) that sometimes the trees in it are visible, but when viewed from a different angle are invisible. My infantry can be seen now, but they're silhouettes and they're in the T-pose for their in-game models. The quad .50 cal AA emplacement sandbags are blacked out, but at another angle are completely fine and properly filled in with color. To answer your question it would seem as if it appears on every map, but so far I've only tested about 5 maps total out of the whole game. It doesn't seem to be a very fair sample size for the entire condition of the game and the issues were different earlier today than they were 10 minutes ago when I retested the maps.

Now the infantry are silhouettes and are in the T-pose.

It's the same on this map, as well. I think this map is Trun.

The sandbags can be seen from this angle and are properly colored and filled in on the model. 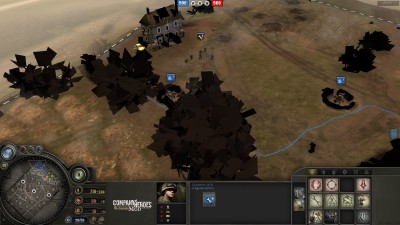 The .50 cal AA emplacement sandbags are not visible from this angle.

The models for the tree are... well, not trees.

MODEL DETAILS need to be at MAX! the Physic on High! <---- mandatory, putting texture quality on high is recomended, Ultra if you have a good machine.

I had the same problem. Check if it's the same in vCoh not just bk. Probably is if your problem is like mine. haha I bet you alt tabbed to often.

Sure fixes (I had to do every now and then):
Reinstall CoH (not BK. It's a CoH/graphics card maybe problem)
Top

The model detail and physics changes made it work! You guys are lifesavers, thank you so much! My laptop was being repaired for about a month and all I wanted to play was this mod! Thanks a lot!
Top

UndercoverMop wrote:The model detail and physics changes made it work! You guys are lifesavers, thank you so much! My laptop was being repaired for about a month and all I wanted to play was this mod! Thanks a lot!

Users browsing this forum: No registered users and 0 guests