If there is something new, it will be posted here.
Post Reply
75 posts

Hello, the beta has been updated to v3 - this one mainly fixes some oversights from the previous one and applies some changes based on the feedback.

US:
- Added .50cal changes to Sherman top MGs (were missing by a mistake)
- Fixed wrong range brackets for .50cals
- 60mm mortar barrage cost lowered to 15 ammo (from 20)
- 80mm mortar barrage cost lowered to 25 ammo (from 30)
- Upkeep of Spotter lowered to cca 4MP/min (from 9.6MP/min)
- Made changes to the HEAT riflegrenade projectile which should help it miss less often than intended (hopefully for good)
- Lowered too high accuracy for M1 Carbines of 101st
- The cost of AT squad in Infantry doctrine should now be properly lowered with Mass Production unlock

WM:
- 81mm mortar barrage cost lowered to 25 ammo (from 30)
- Fixed a bug where StuH and StuPa received no accuracy nerf when shooting at targets in smoke
- Upkeep of Spotter lowered to cca 4MP/min (from 5.3MP/min)
- Increased penetration of 20mm gun on Sdkfz 234 and 222 against jeeps (should no longer happen that the shouts bounce off from normal Jeeps and the chance to bounce off of Armored Jeep is also lower)

About Corsix, I still can't launch it, because it keeps asking for MSVCR71.dll that I already downloaded and put into system folder.
Any hints? 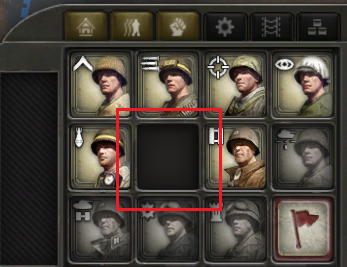 It looks weird with that "black hole" in the middle.

The AT squad could be moved in its place and the rangers when inf doc selected where is the AT squad now. Or with combat engineers, anything just to cover that empty slot.
https://www.youtube.com/channel/UC7JMQz ... hMhHIkIulQ

it's good to know that the L / 70 has better damage now
https://m.youtube.com/watch?v=0currf6sEkU
Top

Do some one have the same problem? It only happens to my with whit the beta 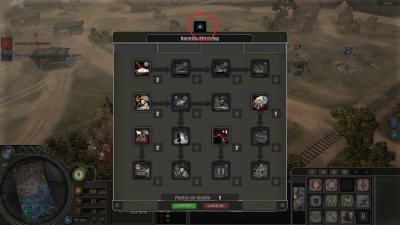 So, flak88 same gun than tiger, not same damage?
Top

MEFISTO wrote:Do some one have the same problem? It only happens to my with whit the beta

I think you need to call the ambulance
Top

MEFISTO wrote:Do some one have the same problem? It only happens to my with whit the beta

I think you need to call the ambulance

So, flak88 same gun than tiger, not same damage?

Nope. Its good that the JP IV/70 (and hopefully IV/A) have got Panther damage at the end. Been asking for it for idk how long.

The emplaced Pak 43 has apparently also 180 damage compared to the 135-165 for the normal Pak 43 and Jagdpanther/Elepahnt/Nashorn/King Tigers.
Top

Playing the beta. Saw my arty was missing everything. ANd not just "missing". Like it was shooting straight across the other side of the map from where I was aiming.

I checked corsix. Was the angle scatter change from 7 to 25 to the arty intentional? I know I personally hate the effectiveness of arty but this is a nerf too far even for me.
Top

It was intentional on some units. What unit was that and did you have vision on the are or were you shooting into the FoW?

Setting up arty correctly is not a question of 2 values. It is possible that some arty units still have the old modifiers for shooting into FoW (which makes them spread a lot more). This worked quite well with the old setup when the basic spread was very small, but now with the bigger basic spread, if some unit was overlooked and still has the old FoW modifiers, the shots could fly really off - that is why I ask about the FoW/vision in the area. And because this has been in since the first arty rework and this is the first time someone complains about it, I believe it is really some forgotten old value.

the objective is in Germany, but the bomb falls on the moon, ridiculous ... does the artillery bother you so much? Was not it enough with the nerf of the mortar?
https://m.youtube.com/watch?v=0currf6sEkU
Top

i did have vision on the target, failed to hit anything. attached is a replay. excuse my raging. you can see me aiming at the house with mefisto's panzerhecks around minute 16. again, i spammed arty at aroudn minute 23 i think? at a house that was really close by.

but i had 25 pounders, prob spent a total of at least 400 munition in the whole game, my howitzers only ended with maybe 5 inf kills added together because the scatter was so bad. i saw the FOW modifier in corsix, but even with vision it was impossible to hit anything.

edit: correction, i think the scatter angle value should be divided by 2. so it'd be xtan(12.5).
so the scatter would be potentially off by
7ish at min range.
200ish at max range.

Excuse me, but the 25pdr was crap since i can remember.

In the very past it got used in masses only for VT (like build in map corner for pure VT use).

The last time ive seen a 25 pdr shooting was ages ago and i considered them only as "pure spam" units with huge spread and randomly dropping shells and i thought that it was the intention to be so since its a 0 CP unit and since RA has super accurate priest in exchange.

It was also used to be cheaper to build than a 105 for exactly this reason i think.


I dont say its good, just saying that this 25pdr has always been like that. It fires less powerfull shells than a 105 (25 is just a 87,.. mm howitzer actually).

Perhaps it could get fixed a bit.
Top

the 105 mm (emplacement) is a garbage now, i spent 150 of ammunition and I was not able to destroy a peeled 88 mm, it is as if a drunk was urinating and is not able to hit the toilet
https://m.youtube.com/watch?v=0currf6sEkU
Top

Shanks wrote:the 105 mm (emplacement) is a garbage now, i spent 150 of ammunition and I was not able to destroy a peeled 88 mm, it is as if a drunk was urinating and is not able to hit the toilet

these 88 guns have 50% damage reduction from arty (it used to be just 25% which made me making leading a crusade against them by spamming them untill enough players got pissed off). But as comparision, tanks and vehicles take 75% of the arty damage. So technically the naked 88 takes less damage from arty than tanks and stuff. So you should hit them directly to cause proper damage.
Top

I mean that the shots fall far, too much in my opinion, it was three rounds, 150 ammunition, it is much in a pvp so you can not hit a target, is sad
https://m.youtube.com/watch?v=0currf6sEkU
Top

yeah 25 pdr was crap. now it's even more crap LOL. like i said, it jumped from 7 angle scatter to 25 angle scatter. that's more than 3 times as inaccurate.
Top

hm that makes sense... it didn't exactly scatter by 400... a cap at 20 is both ways though right? 20 left and 20 right? so that would mean at around range 100 it'll have max scatter (xtan(20degrees)=40, solved for x). that's a pretty steep accuracy drop, i feel this really hurts all faction's ability to take out defenses. it gets even worse on bigger maps where there is a whole lot of nothing to hit. even on small maps, im starting to think that it's hard for arty to land accurate enough that it'd be useful. it'll be more RNG-ish than tactical.
Top

so keep max scatter and reduce scatter modifier so that it doesnt drop of so quickly?
Top

there is no serious bugs on this beta
maybe just release it?
Top
Post Reply
75 posts