I have said this before but I think it would be good to put it here so that newcomers can look at it too.
So AA units work a bit differently than you might expect. To put it as simple as possible: Every AA unit has a certain area around itself. If a flightpath of a plane goes through this area, the AA unit will fire at the plane as soon as the plane gets spawned to the map - AA fire ignores normal range restrictions. However if the plane's flightpath does not cross the area of AA unit, the AA ignores the plane completely.
If you look at the picture below, then planes flying on the flightpaths 1/2/3 will get attacked by the AA unit. Planes on the flightpaths 4/5 will be ignored. 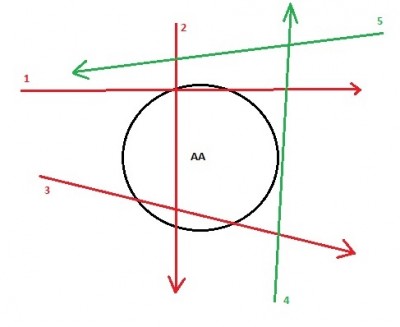 It is generally a very bad idea to send planes on such a flightpath that goes through base sectors - these sectors are usually protected by at least 2 AA emplacements, moreover the base sectors are often so close to each other that your AA emplacement covers part of base of your team mate and vice versa so when a plane flies in the direction of one base, it can get under fire of 3 or more AA guns and thus get killed very fast. For this reason the AA emplacements that defend your base from the start of the game have about 50% less effectiveness against planes than the versions that can be later build anywhere on the map, however even with this nerf the base sectors are still often "no-go" zones for planes.

Note that bigger maps are more dangerous for planes - the plane needs to fly longer to get to the strike area and thus if the AAs target the plane they have more time to shoot it down.

I hope this short article helped you understand the mechanics behind AA and thus will allow you to send your planes in safer directions or build your AA units in positions where they better cover the area you need.

EDIT:
I decided to add some more info on AA units in the game. There are AA units that have "Static AA mode" (M16, Ostwind, Wirblewind, WM armored car, Moebelwagen) - in this mode they dig in and stop targeting ground units and only shoot at planes.
When any weapon fires at any target it goes in this sequence: fire shot/burst -> cooldown (delay between shots/bursts) -> fire shot/burst -> cooldown -> (repeats until magazine is empty) -> reload (on some weapons has reload animation - takes longer than "cooldown")

The problem is that if a weapon fires a burst (and I think all AAs do except for 88s) it fires until the target dies/runs out of range but DOES NOT reload after. So if the gun fired at a group of soldiers and in the clip remained 2 rounds, when the plane comes, it finishes the burst (2 shots) and starts cooldown (which gives the plane time to get closer without being shot at). If you are very unlucky the unit will start reloading after the shots which will give the plane even more time to get close.
However when a unit is in static AA mode, it fires only at planes so the chance that the plane will come when the weapon has only "half burst left" is lower. It can of course happen that the AA will fire half of a burst, destroys plane and when another plane comes it will finish the burst first but in general AAs in static mode have better chance to shoot down planes even if just because of this. For Ost/Wirblewind the AA can be used only if they have the HE rounds active so these two have in AA mode higher damage against planes than in mobile mode.

Also the units reload their weapons when the enter/exit static AA mode so you can use that to your advantage too.

Generally speaking Terror and TH docs have poor AA abilities and their most destructive toys are very vulnerable to airstrikes. If you see your team mate built a KT or JP/JT and you know your opponents has RAF and/or AB, try to provide them with some AA units that will protect them from the air threats.

This certain area, how big it is?

Are there normal properties like for other units like accuracy for AA and plane has received accuracy and such? If yes are there any differences in ally and axis planes? Because from experience it seems axis planes goes down way easier. Also def doc flak, which can by built by pios seems to be very ineffective, compared to Ostwind, for instance. Does it matter if I have loaded HE or AP shells in AA tanks?
"Only by admitting what we are can we get what we want"
Top

Another question, is aa affected by "los blockers"? If I put my aa next to a hedgerow does that make a difference?
Top

Some players say that AA are doing very poorly on maps with many trees. Is that true?
Top

This certain area, how big it is?

To be honest, I don't know. I would have to test it and I have not gotten to it so far... My theory is that it is the max range at which would the AA attack ground targets but I am not sure.

Are there normal properties like for other units like accuracy for AA and plane has received accuracy and such? If yes are there any differences in ally and axis planes?

Yes, there are. Planes have certain target type, against which AA-capable weapons have statistics modifiers in Target Table. The target type of all planes in the game is the same (so e.g. quad .50cal has same modifiers when shooting at Stuka, ME109 and Henschel). I think that the only difference between the planes is that Henschels have 100HP while all other planes have 75HP...I hope I'm right now.

Because from experience it seems axis planes goes down way easier.

If it is so, then the problem is not in planes but in statistics of the AA weapon...it might be set too high.

Also def doc flak, which can by built by pios seems to be very ineffective, compared to Ostwind, for instance.

I think that the 20mm flaks should be more or less the same...maybe Ostwind fires faster? (and the base defense 20mm flak is weaker than the ones you build for resources later with Def doc...but that applies to all base defense AAs)

Does it matter if I have loaded HE or AP shells in AA tanks?

I have not checked this now, but I think that Ost/Wirblewind's HE mode has higher damage output so it should be more effective than the AP mode. Also when vehicles use their "Static AA mode", they become more powerful against planes.

Another question, is aa affected by "los blockers"? If I put my aa next to a hedgerow does that make a difference?

From a certain patch planes are not affected by Line od Sight (LoS) blockers. In the past AAs were painfully ineffective against planes, because even a low bush could make the plane for AA "not visible"...while in ideal case it should work like this:

We wanted to make the AAs more effective in the game and the only way that allowed it was to make it work like this:

So yes, AAs can shoot at planes through LoS blocking objects such as bushes, tree lines or even houses.

Some players say that AA are doing very poorly on maps with many trees. Is that true?

Given what I just wrote above, it seems unprobable.

thank you professor markr. This is really enlightening.
Top

Thx, i always wanted to know how AA works in the game.. Also in my experience axis planes get shot down easier than allied, especially the henschel often with little AA they all fall before entering the map

As far as i know by experience aa area range should be bit larger than their ground attack area since i can send plane quite far from there and the still get attacked.... not totally sure tho.
One question i have is: do aa need to be aiming straight at the plane to hit it? If, for example, i send a plane right above the aa, so when it flies above it (white area above the firing position in pics), emplacement will have to turn gun so it won't be able to follow the complete path of the plane, will then the plane be little bit safer or aa will shoot at it even if not pointing its gun straight at the plane?
If it's not clear i could try to explane bit better

I think I know what you mean...I think the AAs do not fire at planes that are directly above them, or at least when the plane passes above the AA it needs to turn around and during this (short) time the AA won't fire.

I want to add something to it, i see often people crying because their planes are shot down very fast when entering the map, Keep in mind that if your opponent/s got on field 3 AA halftracks... i saw sometimes even more in games, then your planes will get shot quickly, especially if those AA halftracks are correctly placed.

Same goes for ALL AA units in game, like AA crusaders, AA sdkfz etc...etc...etc... you might not see them in the fog of war, but them they see you, and will put holes in your planes.