I quite recently got into map making and I can say i got quite familiar with the World Builder. Except for one little aspect................ map size.

Long story short: making my map was taking me a veery long time, and when i made a size check comparing it to Goodwood.... well...... i was making a map with a playable area which was double the size of Goodwood's and would have probably became too big for the game engine to work properly.

Since i made a few good looking compositions of objects, tiles, splats and decals, I decided to just start a new map and copy-paste a few of my creations to make my work shorter.

I'm also following all Playmobill's tips on how to make maps perform good, and i'm managing to keep them very playable.

Key features of my maps would be:
- not really high res income from sectors (i'll keep it similar to La Fiere in ammo and fuel, maybe even lower);
- BIG square(ish) map shape: i like the midline/frontline to be wider so it can make it easier to flank and harder to just camp, which is usually quite frustrating to face, and harder (but not impossible) for artillery to cause huge damage on unit blobs;
- simmetry: I think one key factor to make maps balanced is making the two factions' halves almost specular, at least for what concerns sectors design (don't take this for granted tho).

Reason why i thought of starting map creation is because there are really few played/playable (good performance/ NO DESYNC) maps in the game. Bigger pvp games are always done on the same 5/6 maps, and since I'm often playing together with my [525] mates, we almost always get to play on Goodwood (only really playable 4v4 map), La Fiere, Bloody Gulch or Road to Cherburg. This is why I wanted a new 4v4 playable map.

I also thought about revising existing maps as Playmobill started doing, but i don't know how the creator's rights thing works so I wouldn't risk touching other people stuff.

Another good reason why I started the world builder is creating maps is a really relaxing quarantine activity, and you don't get the toxicity sometimes you get in game.

EDIT: here's a few screenshots of my creations i'm quite proud of and that i'd like to put in use 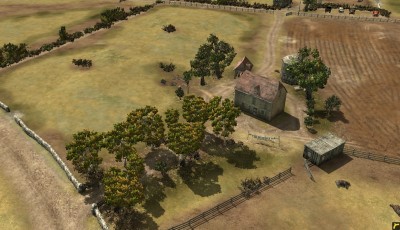 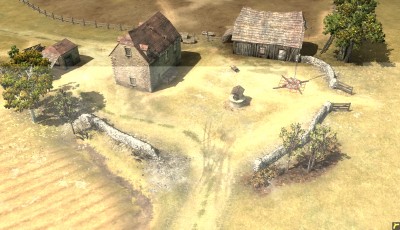 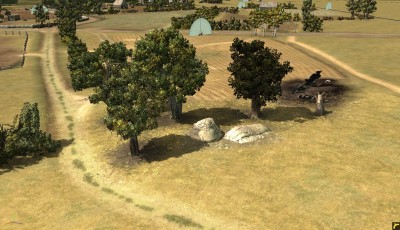 by kwok
FOUR V FOUR MAP KNOWING THAT I WILL ONLY PLAY THREE V THREES ON IT.

by Walderschmidt
FOUR V FOUR MAP KNOWING THAT I WILL ONLY PLAY THREE V THREES ON IT.

by CGarr
^ screenshots look nice, not too cluttered. Haven't done much mapmaking myself so I don't know if its an option, but giving some large open dirt fields the same movement modifiers as roads would be nice for a bit more mobile gameplay with light vehicles, a lot of the current maps have issues regarding light vehicles getting caught on terrain so having nice clear open areas is a welcome change of pace. Either way, screenshots look good.

by sgtToni95
I'm developing it so it will have different areas where engagements are most likely to happen: some city area, some "edges" area and some more open fields which hopefully will see nice tank fights. I only posted "objects compositions" screenshots because i think they're nicer to see than a flat terrain

Btw is there such thing as movement modifiers? I'm quite new in map making as well, but as far as i know movement speed depends on how flat and smooth the terrain is + objects/obstacles.
It should be the same as terrain infantry covers: red cover for inf, which is usually on roads, is because there's flat and smooth terrain with no covers, while yellow and green covers will slow down or block vehicles as well depending on their crashing capabilities.

If you know more i'd be glad to learn

sgtToni95 wrote: ↑
02 May 2020, 08:49
Btw is there such thing as movement modifiers? I'm quite new in map making as well, but as far as i know movement speed depends on how flat and smooth the terrain is + objects/obstacles.

I am not the best source of information on map making but from my experience from making my test map I think cover types are tied to certain terrains you place on the map. When you start a new map the flat terrain is what the game considers as "no cover" cover type. I am not sure if shaping the terrain creates different covers, I think it doesn't.

WorldBuilder has a tool for placing roads (the thing where you click at point A and point B and it connects them with a selected road type - these roads are considered "red cover" in the game (even if you place them on a very uneven terrain), any water surface you create is also considered "red cover". Then most objects you place into the world provide some cover type - you can see what object provides what cover in the world by clicking on the "Cover and Shotblocking" icon (looks like a green shield with a small eye).

Unit movement speed in different cover types is then set in each unit's file (so outside of WB).

by sgtToni95
Road placing tool is the same for placing ditches and walls, i think it doesn't affect cover unless you give it some sort of slope.

For what i've noticed by using the "show terrain cover" tool, terrain cover is given by its smoothness. If you make craters or ditches they would authomatically have their cover bonuses, shown by the tool in a different colour, which stack with those of the objects placed above these deformities.

by MarKr
Oh, OK. I thought that craters were placeable objects too. Well, as I said - I'm not the best source of info on this.

However, I think that terrain and object covers don't stack. In the game files there is a "priority setting" for cover so I think that if a unit is within the reach of two or more cover types, the type that is higher on the priority list applies bonuses and the others are ignored. Sort of like when you build sandbags on a road - the red cover is ignored and the squad gets bonuses from the green cover only.

by sgtToni95
On this matter my experience in gameplay says otherwise.
For example there are a few areas on La Fiere where i built sandbags where there was red cover and my infantry behind sandbags was dying so easily. That happened to all the inf using that cover so i guess that wasn't just particularly bad RNG.
Same kind of experience goes for Goodwood. If you use the plane wrecks on the map as cover, your infantry is kind of invincible, and i think it's due to plane cover stacking to the crater undernieth it.

It's really due to experience and it's hard to be sure about it considering rng role. Maybe Mencius has enough meticulous gameplay attention and game data experience to explain it to us

or maybe he got too distracted by syncro shooting

by Krieger Blitzer
Based on my personal experience on map making as well as Playmobill's advice:

Vehicles movement speed on roads is dependent on the negative cover the road file provides, each road type provides a different cover.. you just need to choose the appropriate road type with negative cover to draw on the map, so that vehicles get speed boost or move at x2 speed while driving on it.

And most road types provide negative cover anyways, except a few.. but as Playmobill says, you can cheat that (and probably even loose the speed bonus as well) by overlapping a texture that adds some cover like a ditch texture or something like that, just make opacity almost invisible.


Note:
Here is also a little advice.. always avoid placing complex stuff on the map without making sure "shot blockers" are positioned correctly... Another thing is to also avoid putting neutral objects which gives XP on destruction.

by sgtToni95
what do you mean by "make sure shot blockers are positioned correctly"?

by Krieger Blitzer
Some objects are physically transparent, in a way that allows units to shoot through them! So, always make sure the indestructible trees you use and the big rocks as well as some other natural walls aren't transparent in nature.. doing so is by applying shot blockers around them.

by PanzarFather
From what I can see on the pictures, it looks rather nice!
All times are UTC+01:00
Page 1 of 1