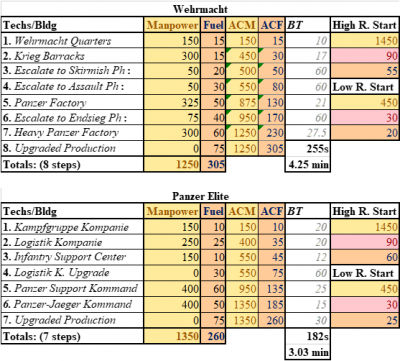 Some notes to clarify a few things.

1) Total Tech is reached when you've unclocked the ability to get the heavy tank possible. That makes this picture a little skewed as each doctrine is slightly different and can unlock their heavier tank at different times & costs. For example defense doctrine and luftwaffe doctrine only have to build three buildings so their heavy tanks cost less to get.

3) Build times are +/- a second or two because I did the stopwatch method rather than looking through corsix.

4) ACM/ACF = Absolute Cost Manpower/Absolute Cost Fuel. This is how many resources a building or tech costs, if you factor in all the pre-requisite costs and buy/build nothing else.

So for example, a Wehrmacht Quarters' ACM/ACF is the same as its build cost because you can build it right away. The Krieg Barracks is similar because it doesn't require the WQ to be built, but I just assumed the player built everything in sequence to illustrate the total costs of everything in general, rather than try to show the variations of slightly diferent routes (you can build WQ or Krieg Barracks first, but still require WQ to tech up to T2).