Do you have a balancing problem or do you want to make a suggestion for the game? You are at the right place.
Post Reply
2 posts • Page 1 of 1

This Topic is a sperated one from this main Topic:
viewtopic.php?f=15&t=3673

I find the Hotckiss as a "I delete the enemie attack with a button" problematic in a doctrine that possess so many good heavy tanks.
You just have to move the Hotchkiss behind your tank line and you get some sort of emergency artillery. But that misses the point of this doctrine as well as the artillery that fails its purpose.

The artillery in this doc is so far focused on short timed, accurate attacks on enemie strong-points and defenses prior to an attack, not a random bombardment. The Hotchkiss does fill its role much better in doctrines like terror and SE which are more about hammering wide areas brutally.

Suggestion:
Thus i am suggesting to replace Hotckiss with either Wespe or Hummel.
If one might think that this would be too OP, i would argue its not. Simply bc the Wespe will cost arround 500-600 MP and a good junk of fuel. Hummel would be arround 700 MP, ammo upkeep as well as paying at least 100 ammo per barrage.
So Wespe and Hummel wouldnt be something just bc you have a few MP to spend somewhere as it is the case with the dirty cheap 280 MP Hotchkiss.

The second advantage would be that these units literally suck in defending your heavies against attacks and usually have in a distance from the front. That means that in case of an emergency, you cant just activate your Hotchkiss literally hammers down the attack wave just a second after you clicked the "Fire button".

Wespe and Hummel are simply a much better suited tactical tool for this doctrine than the no-brainer hotchkiss. 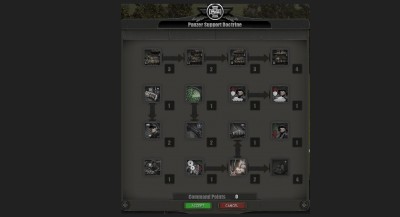 I’m okay with switching out Hotchkiss and Wespe, but keep the Hummels in SE.
Kwok is an allied fanboy!